It’s a treat to welcome acclaimed writer and director Nicholas Meyer whose body of work includes the hit Sherlock Holmes novel, “The Seven Percent Solution.”  The screenplay garnered him with an Academy Award nomination and became a hit film starring Nicol Williamson, Robert Duvall and Alan Arkin.  Nicholas Meyer has written several other novels including his latest Holmes & Watson tale called “The Adventure of the Peculiar Protocols.”  As a director Nick’s debut film was the thrilling “Time after Time” starring Malcom McDowell.  A highlight of his career is taking command of the Enterprise and directing two of the most popular and critically acclaimed films in the series, “Star Trek II: The Wrath of Kahn,” and “Star Trek VI: The Undiscovered Country.”  His list of credits is impressive as his knowledge and love for all things Sherlock! Learn more about your host of the On Mic Podcast, Jordan Rich at chartproductions.com. 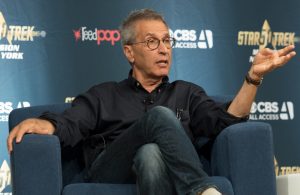